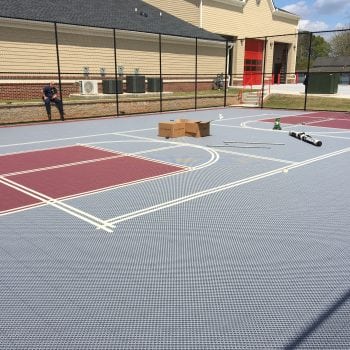 Just last month, the new Griffin Fire and Rescue Headquarters at Station 2 were given a sporty, new upgrade. In partnership with the firefighters of Station 2, Rhino Courts installed a custom athletic court in Griffin on the grounds of Station 2. The court consisted of a four hoop basketball court, which can be used as two full-court basketball courts, and two pickleball courts. The final product is something to behold, with custom colors and a modern feel. The project was overseen by Project Developer Gavin Hensing and Rhino Courts partially, who donated some services to the department and community.

The Community Pitched in Together

For this project, Rhino Courts and the firefighters themselves held a community day, working side by side with local Griffin community members. The City of Griffin community is a strong one with a plethora of local events, and the building of the courts was a proud addition. While adults and teens lent a hand to the development of the sports surfaces, nets, and sidelines, the littler kids were delighted to get up close and personal with real live fire trucks.

This was a great addition to the Griffin Fire-Rescue department’s regular slate of community outreach programs. Outreach projects have included a regular Touch A Truck event for kids, citizen fire and CPR training, and future basketball and other sports programming on their new courts.

Rhino Courts Commitment to the Community

Inspired by the department’s commitment to serving their community, Rhino Courts owner John Shaffer and product developer Hensing decided to offer this project to the City of Griffin at a discounted rate. This partial donation helped the project move forward while reinforcing Rhino’s commitment to community outreach. Rhino staff were able to spend time with the firefighters, while completing the installation.

The Fire Chief’s Bright Vision for the Future

The Griffin Fire-Rescue department is a 65-person, full time, professional fire department, led by Fire Chief Tommy Jones. Jones had nothing but great things to say about the project. “The installation of this court has severely enhanced the morale of our department, and the court has fostered a new level of teamwork which is vital for our public safety mission.”

Installing this custom court has given the City of Griffin a new athletic space that will serve the community for years to come. It will foster new bonds between the Fire-Rescue department and the community and will serve as a valuable team-building exercise for the department itself. Call (800) 585-0922 or visit the Rhino Courts website to learn more about all the different options for your community’s custom court and recreation.